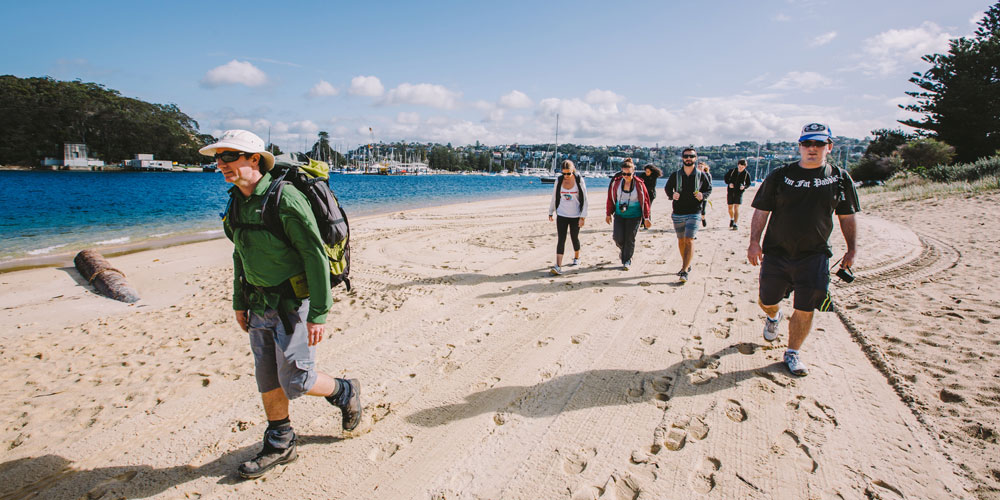 If walking from Sandy Bay… Follow the concrete footpath past Clontarf Marina (former base of Ben Lexcen, designer of the winged keel that helped Australia II win the 1983 America’s Cup) and around to Clontarf Reserve, where it disappears near the playground.

Clontarf Reserve is the perfect spot for a break with toilets, water refills and a cafe. Enjoy the shade of the Norfolk Island pines or Port Jackson figs. Rejoin the track by following the water’s edge.

Clontarf gets its name from a coastal suburb of Dublin, known for the Battle of Clontarf in 1014 which freed Ireland from foreign domination.

An Attempted Assassination at Clontarf Beach

On 12 March 1868 Prince Alfred, the Duke of Edinburgh and second son of Queen Victoria, was guest of honour here at a sailor’s picnic.

Dublin-born Henry James O’Farrell jumped out of the crowd of picnickers, shooting the Duke in the back. The Duke’s rubber suspenders deflected the bullet, sparing him major injury.

Guilty, O’Farrell was hanged a month later, despite the Duke seeking clemency on his behalf.

In the interim, the Irish O’Farrell was quick to air his anti-British and anti-monarchism views.

Sydneysiders were even quicker to fuel existing anti-Irish sentiment. The NSW Government even passed the Treason Felony Act making it an offence to refuse to drink to the Queen's health.

The Duke and the British monarchy were hugely popular in Australia at this time. When the Duke had arrived by ship three months earlier, nearly ten thousand Sydney-siders came out to welcome him in the pouring rain. This was ten per cent of the city’s 100 thousand population.

After the assassination attempt, citizens donated money for a “substantial monument in testimony of the heartfelt gratitude of the community at the recovery of HRH”. Hence the Royal Prince Alfred Hospital in Sydney’s inner west was built in 1882.

Not all of Clontarf’s history is scandalous, well… not murderous anyway. The sailor’s picnic the Duke attended in 1868 was just another function at what is now Clontarf Reserve.

From the 1860s until closing in 1900, thousands would arrive by ferry from the city for drinking, dancing and games at Clontarf’s dance hall and “pleasure grounds”.

On Archibald’s death years later, he bequeathed funds for the building of the Archibald Fountain in Hyde Park, as seen on the Sydney City Walk.

Where to Park at Clontarf Beach?

If you prefer to drive to Clontarf Beach, there is parking available. Carpark entry fees apply, with time–metered parking (residents with designated car stickers have free entry). There are two disabled parking spaces.

There is free parking on the surrounding streets.

Like any nice beach area, parking may be difficult to find on warm, sunny weekends.

Where to Eat at Clontarf Beach?

Clontarf Reserve is an expanse of green park right on the beach. It has plenty of big shade trees as well as a few covered tables. There are well-maintained basic toilet facilities, and an outdoor beach shower for swimmers.

Combined, Clontarf Reserve is the perfect spot for a mid-morning break on the Spit to Manly walk.

Bring your own picnic or enjoy delicious food in the park from takeaway kiosk, Clonnys (renovated early 2020). Their menu includes gluten free options and some locally sourced produce. The coffee is good, so happy days.

Follow the water’s edge around Clontarf Beach and Reserve.

At the southern end of the reserve, an access road meets the beach. Beside this is a large concrete building that looks a little dramatic for this harbourside setting. This is Clontarf Pumping Station.