Dunningham Reserve is Stop 4 on the Bondi to Coogee Walk as marked on the Coogee to Bondi Walk Map.

A long, long time ago (250 million years or so) when dinosaurs still roamed Earth’s supercontinent Pangaea, where you’re now standing was a giant floodplain.

The ancient rivers that flowed down into what is now the Sydney Basin, carried sand and mineral deposits that eventually formed rock. The rock is Hawkesbury Sandstone, and it underlies most of the region.

Hawkesbury Sandstone is mainly quartz, cemented together with clay, but it’s the one to three per cent iron oxide that make this rock so eye-catching. When iron oxide comes into contact with water, and oxygen lingers in the minute gaps between silica grains – slowly, slowly – it rusts. These bands of brown, white and pink colouring – or Liesegang rings to geologists – gives the rock its distinctive colours.

In the millions of years since this sandstone was formed the three main rivers that drain the Sydney Basin; the Hawkesbury, Parramatta and Georges, carved their way down through the sedimentary rock creating steep, narrow gorges.

During the last ice-age sea levels were 100 metres lower than they are today, and the coastline several kilometres east of where you’re standing now. You would have been looking at as similar coastal landscape to modern day stretching far out to see, several hundred metres below you.

It wasn’t until around 6,000 years ago, when sea levels rose to their current position, that Sydney’s famous coastline and harbour were formed.

Many of Sydney’s early government buildings and wealthy Georgian-era houses were built with Hawkesbury Sandstone, including Customs House at Circular Quay, Government House on Macquarie Street, and the Art Gallery of New South Wales, as well as St Andrew’s and St Mary’s Cathedrals in the city.

Gordons Bay, Sydney, is Stop 5 on the Bondi to …

END_OF_DOCUMENT_TOKEN_TO_BE_REPLACED 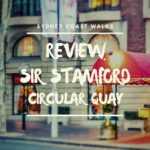