The traditional rivalry between Sydney and Melbourne in Australia is this: while Melbourne does the indoors well (small bars, live music and theatre), Sydney’s outdoor activities are outstanding.

For those looking for adventurous things to do in Sydney, we’ve teamed up with Expedia.com.au to bring you these ideas which go from gentle to adrenaline pumping. There’s also a range of prices from free outdoor activities to once-in-a-lifetime experiences.

Sydney’s sub-tropical climate means lap-swimming or general splashing about in outdoor pools is viable (although not necessarily desirable!) year-round.

Andrew (Boy) Charlton Pool is nestled in a green oasis near the Royal Botanic Gardens, overlooking the Woolloomooloo side of Sydney Harbour. It is a treated salt water 50m pool and cafe, giving swimmers no excuse to leave. 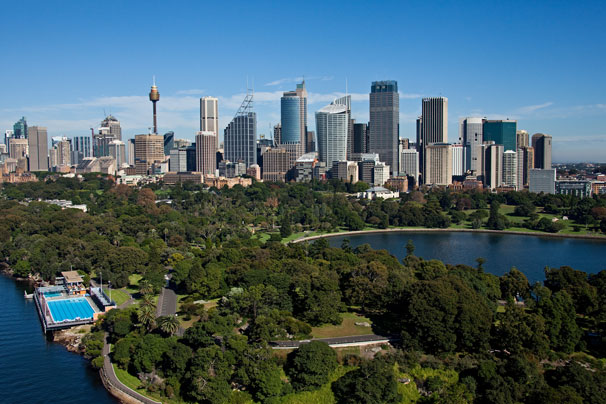 North Sydney (Milsons Point) Olympic Pool sits in prime position close to the northern end of Sydney Harbour Bridge. Gaze over the harbour across to Sydney Opera House while you take a breather.

Bondi Icebergs gets its name from club members who swim during winter in this deep ocean-side pool, rain or shine. Perfectly situated at the southern end of iconic Bondi Beach, it doesn’t get much better than this.

Bronte pool is a small built rockpool tucked away up the southern end of family-friendly Bronte Beach. It’s also the perfect turn-around point for the Bondi to Bronte section of the Bondi to Coogee walk. 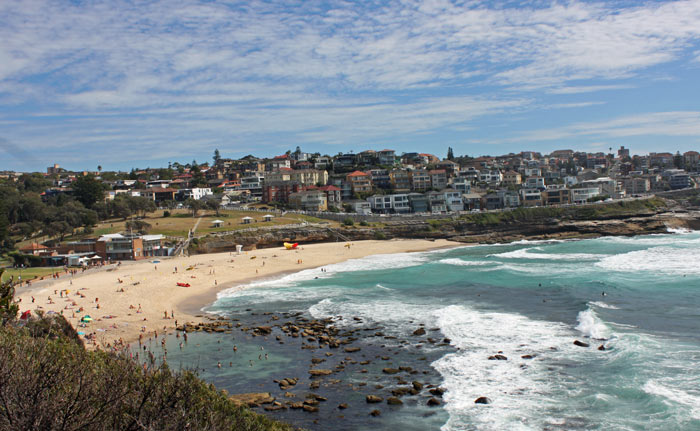 The pool is tucked in the southern end of Bronte Beach. This is the view from near the poolside. Image: Sydney Coast Walks.

Don’t just look at the water; get in it! For glimpses of a rich underwater world, here are two of the best places for snorkelling in Sydney.

Gordons Bay is an attractive protected cove on the Bondi to Coogee walk. But its uniqueness lies under the water. Expect abundant sea life including friendly gropers. Adventure lovers can do the Underwater Nature Trail designed for scuba divers and accessible to snorkelers.

Find how to get to Gordons Bay Sydney. 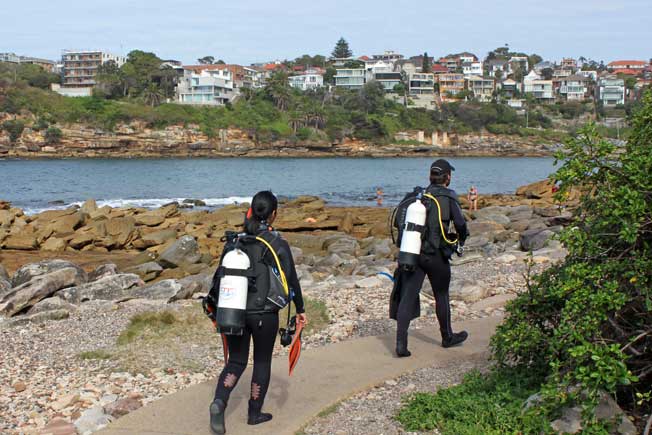 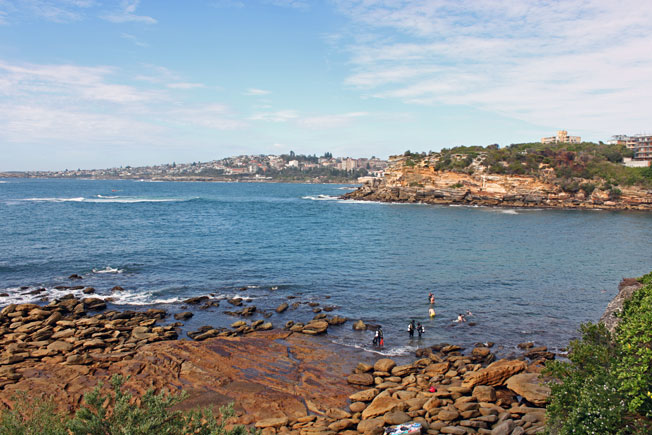 Jump right in yourself, or join a tour with an ecological guide to help identify more than 200 species of fish.

Stand up paddle boarding (or SUP as its known to devotees) is one of the best adventurous things to do in Sydney. The best SUP places in Sydney are calm waters in outstanding natural locations. Try these; 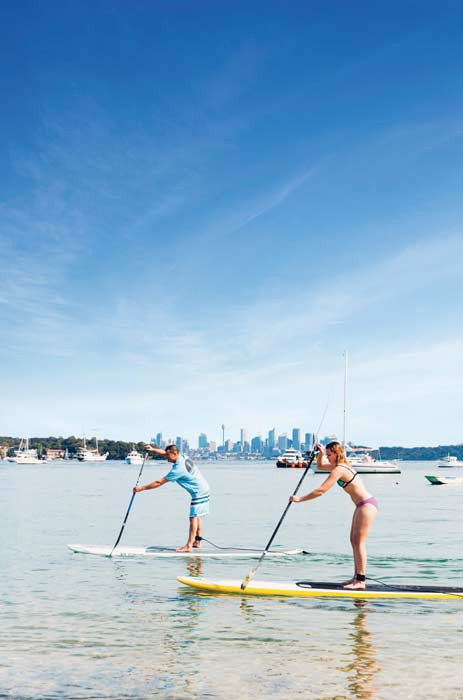 To make the most of an adventurous day in Sydney, start with the Watsons Bay walk out to Hornby Lighthouse, picnic in the park overlooking the bay, then get SUP-ing!

Sheltered in Ku-ring-Gai National Park, The Basin is accessible wilderness boasting abundant Australian wildlife. This area is all about outdoor activities and enjoying the natural beauty. Board hire and guided SUP tours make this day trip to Sydney’s north worthwhile.

At the opposite end of Sydney, Bundeena in the south also offers SUP activities. See more under ‘kayaking’.

Experience the thrill of catching waves with guidance from experienced surf instructors. While Sydney is bursting with beaches, here are the three most popular surf spots for beginners:

Manly Beach, in the north, is home to seven-time world champion Layne Beachley. The local surf school trains from beginners to elite level.

Bondi Beach is the jewel of Sydney’s eastern beaches. With so many visitors, beginner to intermediate surfers are the norm. Look for the flags and signs that show where surfcraft are allowed. The surf school ensures you’ll be up on your feet in the safest part of the beach.

Cronulla in Sydney’s south, is favoured by locals and slightly less hectic. Surf culture is just as strong though, with learn to surf lessons available.

Exploring the outdoors at a human-powered pace means seeing more, up close. Kayaking is also one of the more adventurous things to do in Sydney.

These are our favourite places to kayak for a respite from city life.

After braving Sydney traffic to get to The Spit near Mosman, be blown away with Middle Harbour’s peacefulness once out on the water. Kayaks are available for hire from Sydney Harbour Kayaks, with guided half-day tours to get to the secret spots.

Across the peninsula from Cronulla’s surf beaches is the sleepy inlet of Bundeena. Surrounded by Royal National Park, the calm waters of Bonnie Vale and surrounding natural bushland are reason enough to get outdoors.

Cycling is an outdoor activity as simple as, well, riding a bike. Leave the lycra-clad set alone and instead discover Sydney’s best sights by bike.

These are our favourite places to cycle with leisurely exploring in mind.

If you love getting outdoors and want to see the city sights faster than walking pace, consider a bike tour. In half a day, see the Harbour Bridge, Opera House, and historic Rocks area of Sydney. 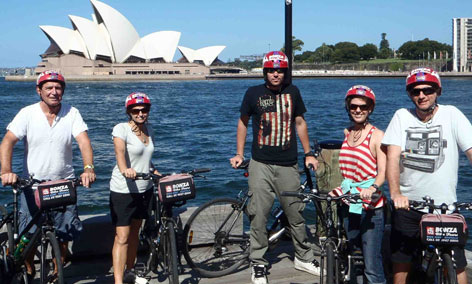 Try a guided bike tour of Sydney's biggest sights. Even as locals, we had fun. Image: Sydney Coast Walks.

Zoom around Manly Beach with a guided bike tour or bike hire. Manly is a peninsula so cycling will get you from beach to bay and out to North Head’s national park faster than a seagull can steal a chip.

In Sydney, Centennial Park is the one place where bikes sometimes outnumber cars. And it’s flat. See the connection? When the sun is shining, cycling at Centennial is a favourite outdoor activity of locals.

Hiring a tandem bike or pedal car seems the most fun way to tackle the 3.8km circuit, although you can bring your own, or hire standard bikes too.

To encourage more outdoor activities in Sydney, there’s a free guide to the city’s cycleways. And here’s a helpful list of where to hire a bike in Sydney.

So much water! From the sedate to wild, getting out on Sydney Harbour is one of the more adventurous things to do in Sydney.

At Watsons Bay, laze around in the park opposite the wharf, stroll up to Gap Bluff for 360 degree views, or walk out to South Head to see Hornby Lighthouse. 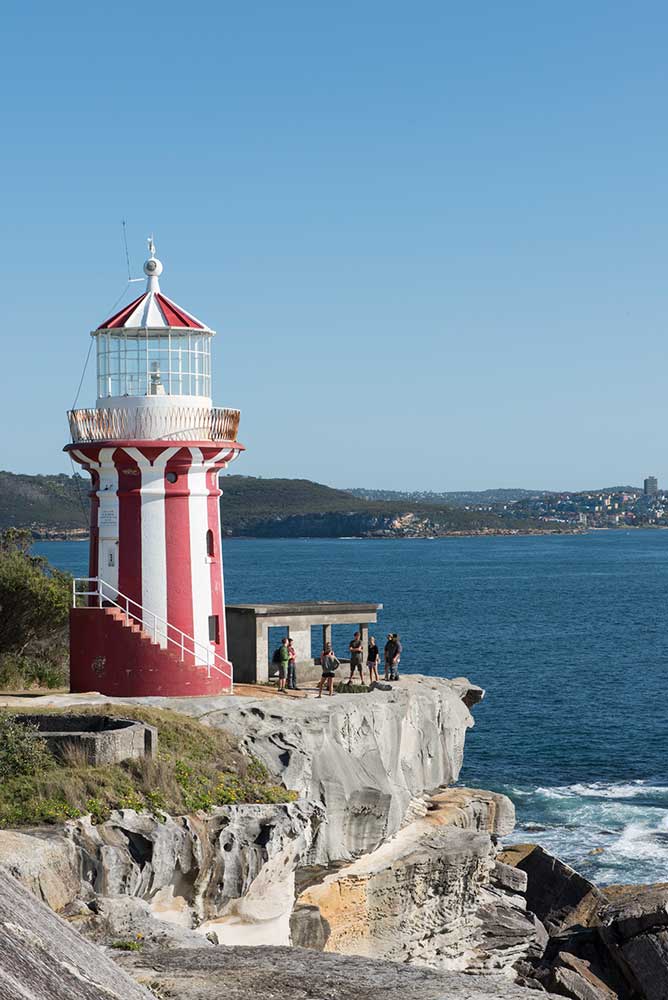 A short walk from from Watsons Bay ferry wharf gets you to to the historic Hornby Lighthouse. Image: Sydney Coast Walks

The ferry to Taronga is the nearest wharf to explore Bradleys Head, even if you’re not visiting the zoo itself.

And a ferry to Manly is a gateway to many other outdoor activities (see surfing, cycling and walks for more).

Or explore harbourside locations with a hop-on, hop-off cruise. Most options have commentary, bar, and 24 – 48 hour ticket validity to get the most out of your day.

Thrill-seekers will love jet boating on Sydney Harbour. It’s half an hour of pure adrenaline where the adventure is the journey rather than the destination.

For an adventurous thing to do in Sydney, even without sailing experience, try an introduction to yachting lesson. Or spend a day at sea sailing on the historic Tall Ship, the James Craig.

Experience a Salute to the Sun… in the sun. Roll out the yoga mats for these top locations for doing yoga outdoors.

Bondi Iceberg’s outdoor pool takes advantage of its fabulous views by hosting yoga classes outside. Head to the pool deck for seaside classes all year-round.

The same yogis run outdoor yoga classes at Manly aquarium and, if the weather’s nice, occasionally leave the local surf club to head into Bronte Park for sessions.

Be quick to nab a spot in a limited season of yoga on the Sydney Opera House forecourt. Running until mid-December 2018, Sunrise on the Steps  is so Insta-worthy there are even guidelines about when you can photos (like, not during Downward Dog…).

Centennial Park, for example, is a predictable favourite for cycling, horse riding and picnics. But to discover more outdoor activities, see the events schedule and you may find yourself spotting native animals after dark, tasting bush food, or learning aboriginal art.

View over the harbour from the Royal Botanic Gardens. Image: Destination NSW.

A guerilla garden so good that eventually it has become heritage listed. That’s the beauty of Wendy Whiteley’s Secret Garden in Lavendar Bay. The disused plot of land was secretly transformed over a twenty year period to become as pretty as its harbourside setting.

The new Barangaroo Reserve is the latest revitalisation project of Sydney’s foreshore, offering surprising views of the Harbour Bridge. It’s a popular space for public events and festivals, so keep an eye out for special activities.

It’s possible to walk from Sydney’s northern tip at Palm Beach to its southern border of Royal National Park. Adventurous types could tackle the whole of Sydney's Great Coastal Walk over five – 14 days.

But if time is an issue, simply cherrypick the highlights, including the Spit to Manly walk for bushland close to the city, and the Bondi to Bronte walk for iconic beaches.

Between May to November, Sydney is visited by migrating whales. Choose either a whale watching cruise or pick a land-based vantage point for whale watching. 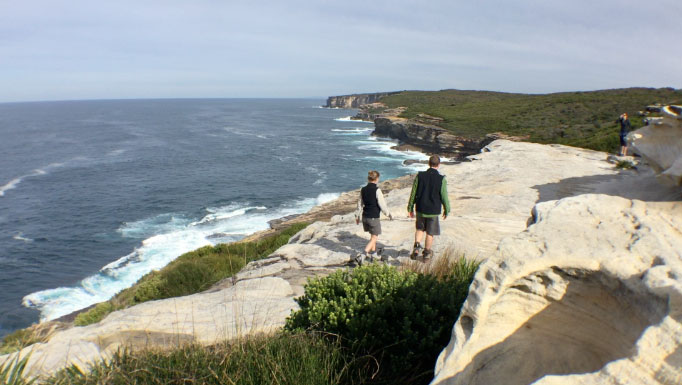 Ziplining has arrived big time, with two Sydney locations. Each TreeTops Adventure Park offers different courses and highlights. The newest offering is at Abbotsbury near Cabramatta, with a rollercoaster-style zip line.