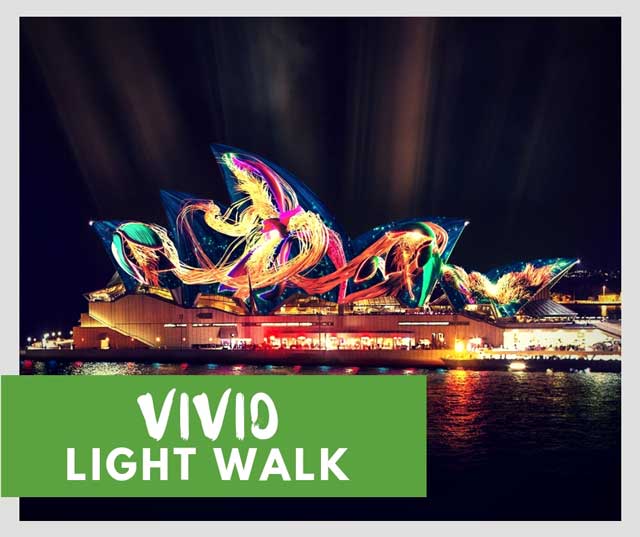 The Vivid Light Walk is the best way to experience highlights of the annual Sydney light festival. It is the zing of seeing the city in a whole new light, when business suits leave and pleasure-seekers take over the night.

Vivid Sydney is a three week spectacle of large-scale light installations across the city designed to be explored on foot. It’s also a festival of music and ideas, if you need any more excuses to step outside at night.

Over the 11 years of the Sydney light festival, Vivid has grown to light up eight city precincts.

The Vivid Light Walk is the best way to see the Sydney light festival. It is the recommended route to explore Vivid’s epicentre around Circular Quay, The Rocks and Botanic Gardens.

It’s possible to extend this route by walking across the Sydney Harbour Bridge to Luna Park. This addition also offers a new perspective looking back to the lit-up Bridge and Opera House.

In 2019, a secondary Vivid Light Walk groups together the Barangaroo and Darling Harbour precincts. The remaining Taronga Zoo and Chatswood areas are best explored separately.

Vivid 2022 will be held for three weeks from late May. Exact dates are yet to be confirmed.

Expect the 2022 walking route to be similar to that announced for the 2019. It will change depending on each year's installation placements, although many of the precincts are used each year.

In 2019, as I was in the crush of people around Circular Quay, I noted that next time I would head to the far more open spaces of the Botanic Gardens. That said, the event planners are more aware of crowd control in 2022 due to COVID19.

Seeing the sails lit up is a highlight of the light show. I'll update this once the 2022 festival is confirmed, with some of the best vantage points to view and photograph the Opera House.

In good news, the organisers release a free walking map each year, available for download.

It's free to explore on foot yourself but for a different perspective, try a harbour cruise.